We get asked a lot how we met, since we both have Cystic Fibrosis (CF) & obviously live on completely opposite sides of the United States…

Our story began only two years ago, when Tiff was trying to check one more thing off her bucket list by meeting Taylor Swift. At the time Lea had no clue who Tiff was, however her Buzzfeed article went viral about meeting Taylor & all of Lea’s friends were sending it to Lea in complete awe of Tiff.

Fast forward a couple of months… Lea was browsing instagram, like she normally does, when she came across Tiff’s account. Lea instantly added Tiff & Tiff added her back & thats when their friendship began with short messages of support & encouragement to one another. However, they didn’t become close until the winter of 2015.

Tiff had uploaded her newest video on her youtube LUNGS4TIFF about the day she was referred for transplant. Lea cried her eyes out watching that video, thankful that she had never been in that situation but fearful it could one day be her. Little did she know exactly 1 week later Lea would be put in Tiff’s shoes.

1 week later Lea had her normal follow-up CF appointment, where she honestly was doing better than she had been over the past year, however Lea’s CF team decided transplant would be her best option in the future if they could not get her hemoptysis (lung bleeds) under control. Luckily at that appointment Lea’s mom was with her, however the news hit both of them hard & Lea was a total wreck. However, she would have been more of a wreck if she hadn’t seen Tiff’s video the week before almost prepping her for that moment.

Lea spent the next few weeks absolutely devastated, feeling completely alone bc no one could relate to her in her life, & unsure of what the future held, however she felt the need to reach out to Tiff & let her know that her video really impacted Lea. And to be honest from that day that Lea reached out to Tiff they became instant besties. CF may have been the driving force that brought Lea & Tiff together, however their friendship is so much more than just CF.  Tiff got Lea through one of the hardest times of her life when no one else could. We may live on opposite sides of the US but distance is no match for the love, support, & friendship we bring into each others lives.

In the Summer of 2016 we were talking about how we could further help the CF community as well as raise CF awareness & funds for CF research. The thing about us is that separately we’ve experienced a good amount of what CF can throw at you, but together we have literally been through almost every situation CF can put you through in life & together we handle it with even more positivity & strength than we do alone. So after a good amount of time throwing ideas & names back & forth Salty Cysters was born.

Lea is your typical 27 year old born & raised in Maryland.

Along with being one of the co-founders of Salty Cysters, Lea graduated with her Bachelors in both Biology & Nursing. She currently works as a nurse, taking care of other peoples loved ones & she volunteers a good amount of her time with the Cystic Fibrosis Foundation as a CF Ambassador & Board Member. She also works closely with the Boomer Esiason Foundation as a co-host of the Breathe In: A Cystic Fibrosis Podcast. She lives a very happy, active, & full life all while fighting Cystic Fibrosis every single second of every single day.

Lea diagnosed with CF at the age of 3. Her CF story got interesting in high school when she ended up developing positional hemoptysis (coughing up blood in various positions) to the degree that on a regular basis she would cough up a hand full to toilets full of blood regularly. This went on for 7 years & with over 9 surgeries trying to solve the problem. However, due to the intense degree of hemoptysis with no end in sight & her lung function plummeted after being taken off a research medication that was keeping her lung function stable, Lea was referred for a double lung transplant back in the winter of 2016.

After receiving the devastating news, Lea decided she wasn’t ready to give up on her lungs just yet. This is when she advocated for herself both in getting herself back on the research medication that was keeping her stable, starting physical therapy to regain lung function, & she advocated receive one final surgery to hopefully resolve the hemoptysis & stabilize her lung function. Thanks to all her efforts Lea’s surgeon was able to FINALLY figure out what was causing her hemoptysis for so many years & she was able to increase her lung function, allowing her to thankfully keep her original lungs & avoid a double lung transplant.

Since that moment 2 years ago Lea has been doing everything she can to remain stable & help others with chronic disease by advocating for them, raising awareness, & publicly speaking on their behalf, so that they never have to feel even half the pain she has experienced within her lifetime. 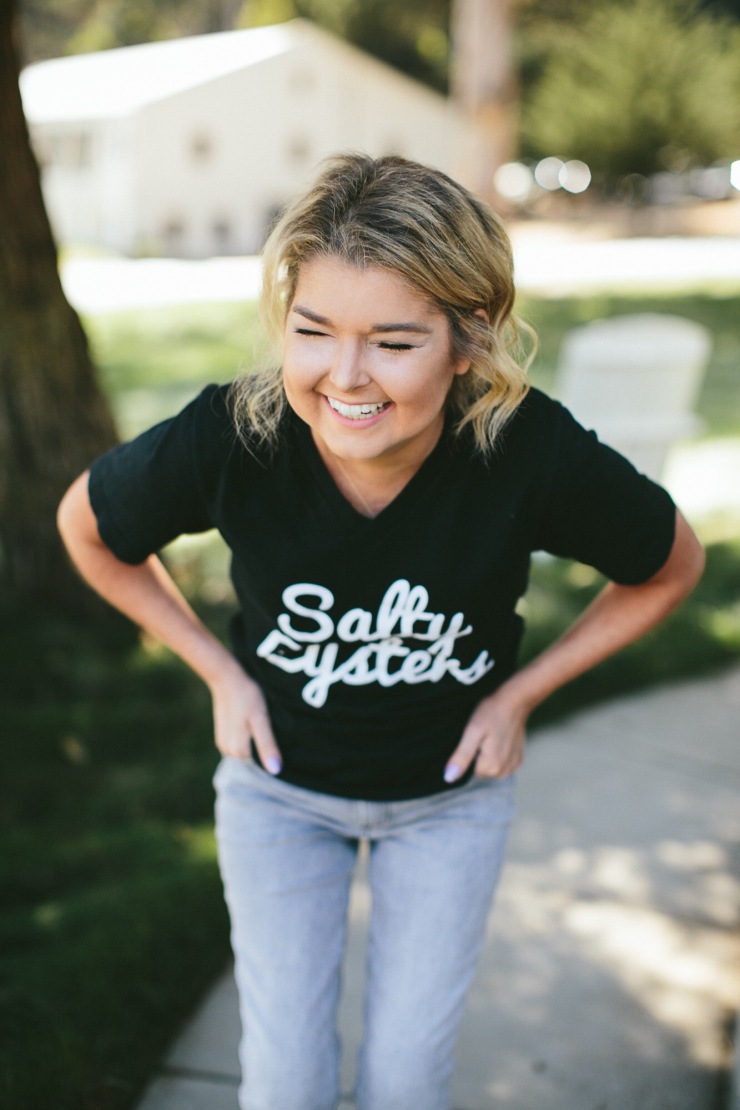 You might recognize Tiff from her Youtube Channel LUNGS4TIFF & her campaign 3 years ago to meet her inspiration Taylor Swift!! With everyone’s help she got to meet the queen herself & yes Tiff would tell you she is even more amazing in person! Along with being one of the co-founders of Salty Cysters, Tiff received her Bachelors in Health Science, volunteers her time with the Cystic Fibrosis Foundation & works closely with the Boomer Esiason Foundation as a co-host on the Breathe In: A Cystic Fibrosis Podcast

Tiff was diagnosed with Cystic Fibrosis at birth & was told she wouldn’t make ti to see her 18th Birthday. Thankfully with research & development of new drugs & therapies, Tiff was able to exceed that expectancy. Tiff lived a very active childhood & never let CF hold her back. She’s always thought of her CF as a blessing because it has shaped her into the person she is today.

However, around the time Tiff turned 21 her health took a turn for the worse. Thanks to a lovely infection her lung function dropped from 50% to 22%. She was able to bounce back, however her health was never the same. She was eventually told that she needed to be evaluated for a double lung transplant & on March 12th, 2014 she was listed for a double lung transplant.

Tiff waited 973 days before getting her lifesaving call & on November 30th, 2016 Tiff underwent a double lung transplant, where her CF lungs were removed & she was given new lungs from her selfless donor. After spending a month in the hospital recovering from surgery & a pneumothorax just a few month later landing her another surgery & more time in the hospital, Tiff is living a happy, healthy, & active life thanks to her incredibly selfless donor. She has made it her mission to now help others battling chronic illness & to one day see a cure for CF!!